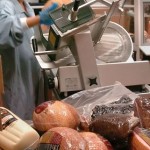 GRAND RAPIDS — Two area meat-packing plants are being sued separately in federal court for allegedly not paying their workers for a full day, including the time spent putting on and taking off their required protective gear.

While the suit is being brought by a dozen workers, the number of plaintiffs could swell to 1,400 current or former meat-packing employees if the lawsuits achieve the class-action status being sought.

He said both plants failed to meet federal law that requires employers to pay workers for “donning and doffing” — the time they spend putting on and taking off required protective gear such as safety glasses, hair nets, gowns, boots and gloves.

Both companies deny any wrongdoing, saying they pay their employees fairly and according to the law.

That lawsuit, filed earlier this year, also argues Boar’s Head violated the minimum wage law and was unjustly enriched from the deal.

The company denies the claim, saying two years ago it implemented a written policy to ensure workers were getting paid for their donning and doffing time, said RuthAnn LaMore, director of communications at Sarasota, Fla.-based Boar’s Head.

“Our policies were put in place toensure employees are treated fairly,” she said. “We have fulfilled the legal obligation. That’s why we’re fighting the class action lawsuit.”

U.S. District Judge Robert Holmes Bell is assigned to the Boar’s Head case and is expected to make a decision about its class-action status in the next month.

Such a collective classification would open the door for another 900 workers at Boar’s Head to join the lawsuit, and 500 more at Michigan Turkey if U.S. District Judge Robert Jonker agrees to the class-action request in that case, attorneys said. Michigan Turkey Producers Cooperative officials reject all claims in the lawsuit.That second lawsuit, filed in May by Guadalupe Aguilera, alleges the Michigan Turkey Producers Cooperative, 2140 Chicago Drive SW in Wyoming, consistently denied overtime pay, exploited an employee’s inability to speak English to “abhorrently underpay him,” and didn’t pay for preparatory time, including donning and doffing.

The lawsuit also claims Aguilera was not paid for the time he spent waiting in line for the first and last turkey to arrive to his station in the assembly line — the equivalent of about 30 minutes per day.

The company rejects all these accusations, said attorney John Lichtenberg. That lawsuit still is in its early stages.

“From the company’s perspective, they’re paying for the donning and doffing time,” Lichtenberg said. And as for allegations that the company is not paying employees for their work, “that simply is not true.”

In affidavits related to the Boar’s Head lawsuit, workers stated they routinely arrived at the Holland plant several minutes before the start of their shifts to put on the protective gear required to ensure safety and sanitary conditions.

They also claim part of their unpaid 30-minute lunch break was used to don and doff the protective clothing.

The employees represented in the Boar’s Head suit performed tasks such as pulling pork and turkey meat from processing machines to weigh it and transport it to a decontamination area; processing, packaging and sealing the meats; and cleaning the machines and trucks with chemical stripping liquids.

The employees, who worked for Boar’s Head for between two months and three years and earned between $11 to $13.50 an hour, may have lost anywhere between 10 to 30 minutes of pay per day, attorneys allege.

LaMore, the company’s spokeswoman, said workers are allowed to arrive at their jobs earlier, but the company does not require it. She said the company’s policy gives workers 15 minutes at the start of their shifts to put on the required gear and get to their workstations.

Alvarez, the plaintiff’s attorney, said while Boar’s Head has a written policy, it has not been implemented at the Holland plant.

“All 11 workers have consistently said they’re ready to work at the start of their shift and not getting paid for that time,” Alvarez said.

“Even if the company policy says one thing, in reality … it’s different from what’s on paper.”