July 12, 2011 - Posted by: Site Administrator - In category: Uncategorized - No responses

The U. S. Army 126th Band, the official Band of Michigan’s Governor, performed at Williamston’s new band shell on Saturday, July, 2, 2011 at 7 PM. This performance marked the very first performance by any U.S. Service Band in the history of the City of Williamston. The band was under Sgt. Tim Bender’s leadership.

The band performed a diverse program including rock, jazz, and classical band compositions, which included:

• Americans We by Henry Fillmore,

• Many of Sousa’s Marches including: Stars and Stripes Forever

• Glenn Miller’s In The Mood, and

• All of the U.S Service songs were performed by the 126th Army Band.

• Over 500 enthusiastic music fans were in attendance.

Attorney Tom Fredericks arranged for the band’s performance and served as Master of Ceremonies. The concert was sponsored by:

Prior to the concert, Attorney Paul Joseph and Dawn Marie Joseph generously donated their time and resources by hosting a dinner at their own Gracie’s Place in Williamston for over 50 Army band members and their guests. The band members said that Paul’s ribs were the best ever and that Dawn Marie’s homemade rolls were terrific. Paul and Dawn Marie reported that they were honored to have such fine and enthusiastic soldiers visit their restaurant. Paul reported: “it was like having 50 hungry college students come home for dinner- on exactly the same day!” 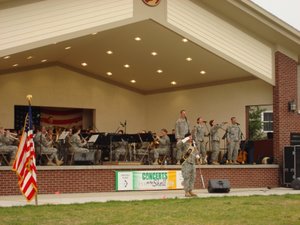